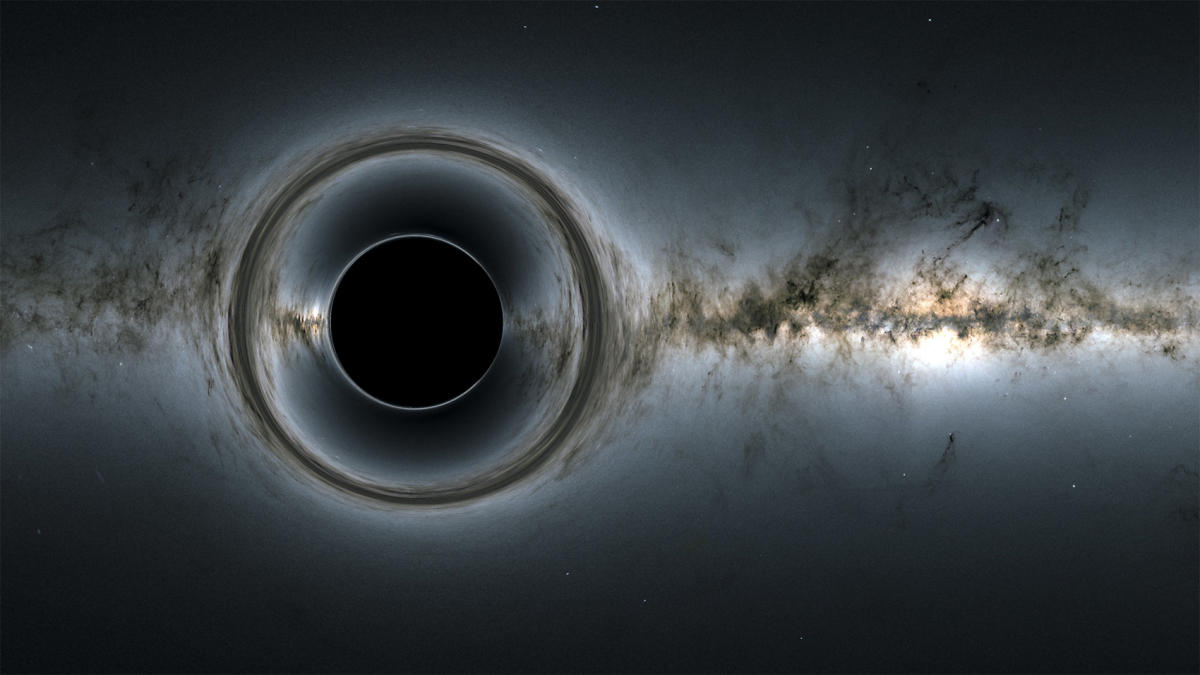 Astronomers have found the nearest known black hole candidate to Earth, a quiet beast nearly ten times as massive than the Sun just 1,570 light-years from us*. It was found through the antics of its Sun-like stellar companion, but how it came to be is a head-scratcher [link to paper].

There are likely a hundred million black holes in our Milky Way galaxy alone, but finding them is difficult. The easiest way is if they are in a binary system with a companion star, and they’re close enough together that material is stripped from the star and falls into the black hole. As it piles up outside That Last Big Step the material heats up and emits a lot of high-energy radiation, basically announcing the black hole’s existence.

But if the black hole is alone, or is in a binary with the star orbiting farther out, it’s quiescent, making it hard to detect. The thing about black holes is they’re black, so they can only be detected via their immense gravity.

Still, that can reveal them if conditions are right.

In the case of this new one, they were. But even then, it’s a tricky discovery.

Artwork of a star about to be torn apart by an intermediate mass black hole. The material falls in to the lack hole, creating a lot of X-rays and allowing astronomers to learn a lot about the black hole. Credit: ESA/Hubble, M. Kornmesser

The Gaia spacecraft is a European Space Agency mission to map out the locations of nearly two billion stars. It not only gets their positions in the sky to phenomenal accuracy, it also measures their motions and colors.

If two stars orbit each other, then each will trace a very small ellipse in the sky. In most cases this physical motion is too small to be seen, but for relatively nearby binary systems with a wide orbital separation, Gaia can spot this change in a star’s position over time.

There are nearly 170,000 such wiggling binary stars in the Gaia database. The astronomers here looked for ones with unusually large motion — indicating one of the stars is very massive indeed — but where the overall light from the system was fainter than expected. Massive stars are bright, so if the motion of binary indicates one is massive but severely underluminous, it could be a black hole.

They found a handful of promising candidates, but after more careful analysis found just one that looked solid: the star Gaia DR3 4373465352415301632 — they call it Gaia BH1 (“Gaia Black Hole 1”) for convenience. It’s a star in the constellation Ophiuchus, with colors and brightness that indicate it’s much like the Sun, though a little bit cooler and less massive. Gaia directly measures its distance via parallax as 1,570 light-years from us, which is consistent with its brightness.

If it weren’t for the fact that the star is making a tiny ellipse in the sky it would be completely unremarkable. There are no other stars nearby that could be related to it, yet there it is, moving back and forth in the sky with a period of 185.6 days.

They obtained spectra of the star using several different ground-based telescopes, and used them to measure the star’s Doppler shift as it orbited its unseen companion. The star’s velocity is quite high, well over a hundred kilometers per second, indicating the companion object is very massive indeed. They find it has a mass of 9.8 ± 0.2 times that of the Sun, and that’s the clincher. A normal star that massive would be phenomenally bright, many thousands of times brighter than the Sun-like star, completely swamping it.

The fact that the object is very massive but completely dark is only really explainable if it’s a black hole. Technically it’s not confirmed, so we have to call it a candidate, but given the data I’d bet a decent amount of money it’s a black hole.

It’s an odd system, too. We know of other black holes in orbit with normal stars, but none this widely separated; the star is roughly as far from the black hole as Mars is from the Sun. This is actually a problem, due to the way the black hole formed.

It would’ve initially been a star with roughly 20 times the mass of the Sun, which is a powerful monster. It would’ve run out of fuel in its core after only a few million years after it was born, while the lower-mass star was still on its way to settling down to be a normal star itself. Then the massive star would’ve swollen into an enormous red supergiant, large enough to physically engulf the smaller star. This is called the common envelope phase of a binary. In general, the outer layers of the more massive star are ejected by the motion of the lower-mass star, and in turn the two stars wind up moving closer together, though in this case the second was likely too lightweight to do this efficiently.

It’s hard to get a star this far out from that scenario; normally they’d be just a few million kilometers apart. At some point the more massive star explodes as a supernova, losing some mass, which can move the second star farther out… but not hugely.

It’s possible there used to be a third star in the system, and that could fiddle with the orbits enough to explain the system, but that situation is finicky and has a narrow set of parameters to work. It’s also possible the system was born in a star cluster, and the gravitational influence of the other stars during close passes could poke the binary into what we see today.

The big question now is, how common are systems like this? One has been seen previously in a nearby galaxy — Kareem El-Badry, the Principle Investigator on the Gaia BH1 paper, also worked on finding this earlier one, too — but the fact that this one is close to us implies systems like it are common. The galaxy is 120,000 light-years across, so if these things are rare, then the nearest one being so close would be extremely unlikely. If they are common then Gaia is likely to find several more in the future; the longer it observes the same stars over and over the easier it is for it to detect their motions.

It’s ironic that we know of thousands and thousands of black holes in distant galaxies millions and billions of light-years away, because they’re truly enormous and blasting out truly immense amounts of energy, yet the vast majority of black holes in our own galaxy are completely invisible to us.

Now. They’re invisible now, but we’re getting better all the time at finding them. They’re dark, but they can’t hide forever.

* I’ll note this is still a very long way in human terms — 15 quadrillion kilometers! — so it’s no danger to us.